Bringing Safe Sanitation to Even the Remotest Areas

Some 4.5 billion people worldwide live with unsafely managed sanitation, according to the World Health Organization. And in countries with water stresses, flushing toilets only exacerbates the problem, which means this issue affects nearly the entire planet. 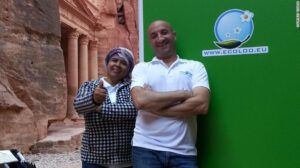 EcoLoo with its waterless and odorless sustainable toilet was founded by Zuraina Zaharin, a Malaysian entrepreneur, adventurer and environmentalist who once encountered unsanitary toilet conditions in the area around Mount Everest, and Imad Agi, who conceived a waterless toilet system that is ideal for organic farming. Together they refined the product and took it to market.

Zaharin explains that “the toilet works by adding a microbe solution to the waste chamber. The microbes break down human solids — normally in three to four days — leaving behind ‘ashes’, while liquid waste is turned into liquid fertilizer, which can be extracted via an outlet.”

How the EcoLoo solves water, sanitation and hygiene, and other issues worldwide

Humans use 141 billion liters of freshwater globally every day to flush toilets. Meanwhile, “water stress is the biggest crisis no one is talking about,” said Andrew Steer, the head of the World Resources Institute. Diarrhea linked to inadequate sanitation causes an estimated 432,000 deaths every year, says the United Nations. 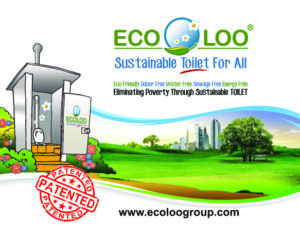 The economic burden of poor sanitation falls most heavily on the poorest. Improper sanitation facilities are linked to a lack of security, well-being and dignity for women and children, water leakages from pit latrines or untreated individual septic tanks that can contaminate water underground, and waterborne contamination that causes 80% of illnesses in developing countries.

The EcoLoo reduces water use to zero and removes the germs that cause disease in places with poor sanitation. It brings social benefits such as creating jobs, reducing extreme poverty, protecting women’s dignity, saving lives and improving health and hygiene.

Its environmental benefits include a lower carbon emission footprint, the reduction of water consumption due to flushing, reduced energy used to treat and pump water and wastewater, and reductions in chemical fertilizer use, leading to less pollution.

Its long-term and sustainable strategy is based on an inclusive business model and will create jobs and business opportunities locally from production, distribution, installation and support to the collection and reuse or sales of the fertilizer generated via the toilet system.

On the right track

The various accolades and awards it has received prove that EcoLoo is on the right track. Although EcoLoo is not the only “sustainable” toilet that exists, the time is right for less resource- and energy-intensive toilets to become mainstream.