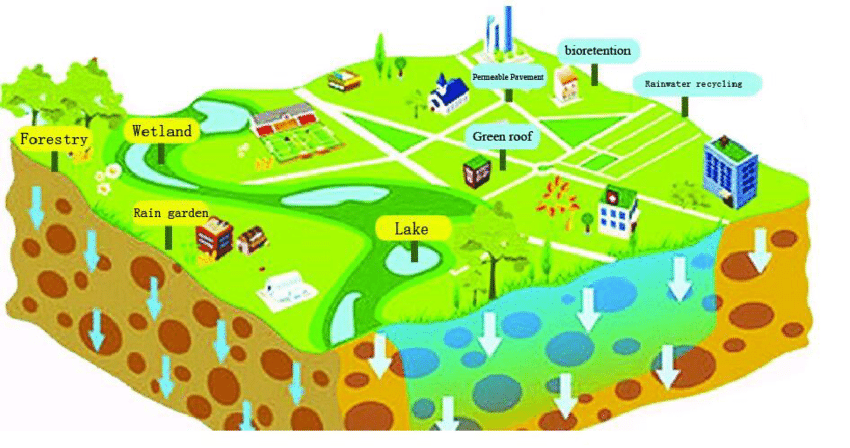 Sponge Cities: Working with Nature Rather Than against It

According to Professor Kongjian Yu, a Chinese ecological urbanist, draining all the water away from cities is a bad idea and not effective in containing flooding.

It’s clear that cities are more likely to flood than rural locations because concrete surfaces repel water and the water cannot seep into the ground. But a city can solve its water problems instead of creating them. Rather than funneling rainwater away, a city can retain it for its own use, and in the process recharge depleted aquifers or irrigate gardens and urban farms. How? Through the Sponge City concept.

Kongjian Yu is an expert in landscape architecture, which he studied at Harvard. Instead of using concrete or dykes to channel a river and protect a city from flooding, he had the idea to use nature-based solutions to stem inundations in cities. He has created sponge cities, which allow natural water flows. The idea is to use a wetland system as a sponge to retain the water and hold it instead of draining it away. Yu recommends that city flood walls actually be removed and “eco-friendly terraces” be created. During the monsoon seasons, the system allows water to accumulate while, during the dry seasons, the land becomes a park. Yu proposes to replace grey concrete banks by a more natural setting: clean water, abundant vegetation, plant and animal life. This restores the wetlands and riverbanks.

Yu’s sponge cities are areas designed to passively absorb, clean and use rainwater. A sponge city has permeable pavements with pathways that absorb and filter stormwater, landscaping with green walls and roofs, and green buildings that have abundant vegetation on their surfaces to absorb rainwater. The plants also contribute to flooding control.

According to Yu, this green solution works. He is applying his sponge city techniques to cities in the US, Russia and Indonesia. His ecologically based or nature-based solution can be used worldwide to contain flooding.

Check out this short, awarding-winning video that highlights this positive solution for the planet. It is a collaboration between the World Economic Forum, the WWF and Silverback films.