A Bacteria that Has Developed a Taste for Plastic

The news is full of stories about how plastics are further encroaching into even the most remote regions of the Earth, the latest example being the discovery of microplastics in fresh Antarctic snow, probably the result of traveling through the atmosphere.

While the news is indeed dire and the need to curb the production and consumption of plastics grows by the day, more and more solutions to tackle the plastic that is already in the environment are coming to the fore. 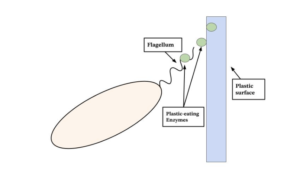 The Good Times back in 2018 wrote about fungi that break down plastic. Now the race is on to create the first large-scale commercial applications of a plastic-eating bacteria discovered in 2016 by Japanese researchers collecting bottles outside a recycling facility. They discovered that the Ideonella sakaiensis bacteria were “eating” their way through the plastic, according to the journal Science. While most bacteria eat dead organic matter, for some reason the Ideonella sakaiensis bacteria like to consume PET (polyethylene terephthalate) plastic.

This promising solution could help tackle the 14 million tons of plastic that end up in the ocean every year by diverting it to recycling centers that can effectively treat it.

Plastic in the ocean has severe consequences for marine ecosystems as it often suffocates and entraps marine life. Additionally, when fish and other marine animals that humans eat ingest plastics, we end up ingesting them too. This is bad for the health of all marine animals and all life that depends on them.

On land, the plastics that don’t end up in the ocean tend to end up in landfills or are burned in incinerators, as there is not enough recycling capacity to overcome the huge amounts of plastic discarded every day. According to the BBC, just 16% of all plastic produced is recycled to make new plastic.

The companies that are the biggest users of single-use packaging for their products, such as food and beverage companies, are investing in finding a solution that will not have serious consequences for their bottom line, realizing that the plastic pollution problem is an increasing impediment to their ability to do business efficiently. The climate action NGO WRAP reports that the global packaging industry alone generates 141 million tonnes of plastic waste each year. Yet for any of this to be useful, the bacteria need to be able to degrade plastic much faster – hundreds or thousands of times faster – which is no small affair. Some scientists have had luck modifying bacteria so they break down plastic in days instead of years, and others have created a “super enzyme” that combines two different plastic-eating enzymes.

Carbios is a French firm that launched an industrial demonstration plant for its enzymatic recycling process in September 2021. The enzymatic recycling uses enzymes produced by the bacteria to break down the plastic. “This demonstration plant, located on a site of the Michelin Group in Clermont-Ferrand, will validate the technical, environmental and economic performance of the enzymatic PET recycling process. This step will make it possible to prepare the complete engineering documents for the process (from waste to monomers) for the construction and implementation of a first industrial unit,” the company states on its website. It adds that its enzymatic recycling process “allows infinite recycling of all types of PET waste as well as the production of 100% recycled and 100% recyclable PET products, without loss of quality.” Carbios is partnering with L’Oréal, Nestlé Waters, PepsiCo, Suntory Beverage and Food Europe, Novozymes and Technip Energies to promote the circular economy of plastics and to help it develop and industrialize its technology.

This solution does not break the plastic down into its most fundamental elements but back into the monomers that compose plastic. This makes it an effective closed-loop system for the re-creation of plastics, without removing plastics from the system altogether.