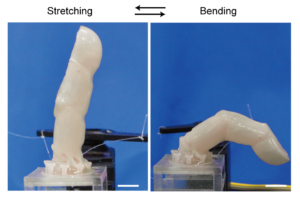 Robotic finger bending. The main advantage of growing skin on the finger directly is that it’ll be a perfect fit, allowing the device to bend easily. If the skin were cut from a flat sheet and adhered to the finger, the imperfect shapes and seams would interfere with the movement. ©2022 Takeuchi et al.

It may sound like science fiction, but it isn’t. Researchers at the University of Tokyo have, for the first time, made “living” skin for robots out of human cells.

While this may sound creepy, it is actually a technological advance that will have serious implications for both how robots work and how humans interact with them.

“Our creation is not only soft like real skin but can repair itself if cut or damaged in some way,” said the study’s leader, Shoji Takeuchi, in a statement. “So we imagine it could be useful in industries where in situ repairability is important as are human-like qualities, such as dexterity and a light touch.”

Until now, robots mostly had rigid parts made out of metal or plastic, making them appear, well, robotic. Even those that have rubber or other more life-like coatings still do not look or feel human.

Now, you may rightfully ask, why in the world would we want robots to look and feel like humans?

In terms of our physical world, a robot with a skin that acts and reacts like human skin would be capable of sensory touch like humans. Our skin has sophisticated sensors that are incredibly difficult to engineer; it is waterproof, it heals itself, and the vascular system underpinning it keeps it alive and able to regenerate, over and over again. All of these are important in situations that require a gentle touch or robustness.

For instance, a regular robot hand with fingers has a hard time picking up things that are solid and angular because the hand cannot conform to the contours of the thing it is picking up. Additionally, it cannot adequately judge how much pressure to apply. A robotic hand covered in human-like skin would be able to adjust itself to the object, just as a human hand does.

In psychological terms, if we were to interact with a robot that appeared human, it would make our interactions in settings like customer service or healthcare more natural. Admit it, you are probably already more receptive to phone calls with a real person than with a computer. Extend this to the physical world and imagine how much easier some interactions would become. 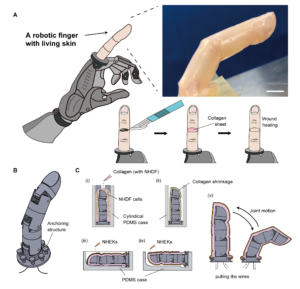 Robotic finger. Illustration showing the cutting and healing process of the robotic finger (A), its anchoring structure (B), and fabrication process (C). ©2022 Takeuchi et al.

Equivalents to human skin made from human cells and materials like collagen have been around for years and used in research and skin grafts. The challenge for Takeuchi and his team was to use tissue culturing to cover a controllable robotic finger with living skin tissue. The team aims to add other kinds of cells in future iterations, giving devices the ability to sense as we do.

According to a University of Tokyo press release, Professor Takeuchi is a “pioneer in the field of biohybrid robots, the intersection of robotics and bioengineering. Together with other researchers at the University of Tokyo, he explores artificial muscles, synthetic odor receptors, lab-grown meat, and more.”

“Our skin model is a complex three-dimensional matrix that is grown in situ on the finger itself. It is not grown separately then cut to size and adhered to the device; our method provides a more complete covering and is more strongly anchored too,” said Takeuchi in the press release.

“Three-dimensional skin models have been used for some time for cosmetic and drug research and testing, but this is the first time such materials have been used on a working robot. In this case, the synthetic skin is made from a lightweight collagen matrix known as a hydrogel, within which several kinds of living skin cells called fibroblasts and keratinocytes are grown. The skin is grown directly on the robotic component which proved to be one of the more challenging aspects of this research, requiring specially engineered structures that can anchor the collagen matrix to them, but it was worth it for the aforementioned benefits,” said the university’s press release about this success story.

“In the future, we will develop more advanced versions by reproducing some of the organs found in skin, such as sensory cells, hair follicles and sweat glands. Also, we would like to try to coat larger structures,” added Takeuchi.

According to the press release, the primary goal for this research is “to open up new possibilities in advanced manufacturing industries. Having humanlike manipulators could allow for the automation of things currently only achievable by highly skilled professionals. Other areas such as cosmetics, pharmaceuticals and regenerative medicine could also benefit. This could potentially reduce cost, time and complexity of research in these areas and could even reduce the need for animal testing.”