A Tribute to Two Women: One Illustrious and the Other Industrious 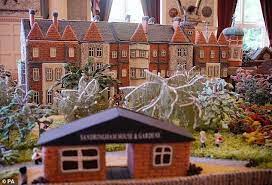 Part of the Sandringham House model in wool (Source: Pinterest)

In homage to Queen Elizabeth II and the people of the United Kingdom, The Good Times highlights a story about another admirable, albeit lesser-known, British woman. Margaret Seaman, from Caister-on-Sea, near Great Yarmouth in Norfolk, England, is an avid knitter in her 90s. She created a knitted model in wool of Sandringham House, one of The Crown’s royal residences. She began this project in 2019 and worked on it “on average about 10 to 12 hours a day” during the Covid-19 lockdown in 2020.

“After I lost my husband I joined a knitting group, and it all snowballed from there,” Mrs. Seaman said in a June 2021 BBC News interview. “And then I just thought, if I can think of something to do that we can show to people, and raise money for a charity, it would be something worthwhile doing. That’s how it all started.”

At that time, Mrs. Seaman met the Queen as she was setting up the display in the ballroom of the country house. Of her private meeting, she recalls, “When I look back on it, I just think how lucky I was to meet her. … After I spoke to her, a year ago now, and I look back on that, I always think to myself it was just as though meeting a sister again after a long time. It just seemed as if I’d always known her, she was so friendly and kind.” In an article in September, the Eastern Daily Press reported that the knitted display of Sandringham House raised £20,000.

In June 2022, Margaret Seaman was awarded a British Empire Medal for “charitable service in Great Yarmouth, Norfolk, particularly during Covid-19.” She had already knitted a garden with a pond, which was displayed at the James Paget University Hospital, raising £13,000 for the palliative care center. She has created other works, including one representing Knittingale Hospital’s temporary wards established to cope with the coronavirus pandemic.

The Great Yarmouth Mercury weekly newspaper reports that her wool recreations have raised over £50,000 for local causes. Boris Johnson, Prime Minister of the United Kingdom from 2019 to 2022, recognized Mrs. Seaman’s efforts and wrote to her: “You have raised thousands of pounds and lifted the spirits of the nation.”