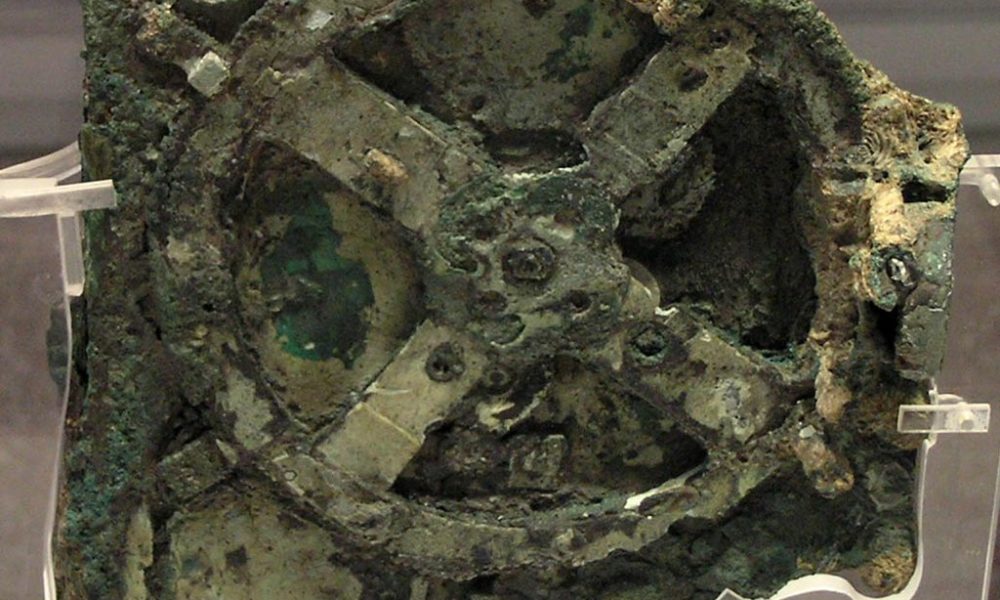 A Device of Genius: The World’s Oldest Computer Constructed 2,000 Years Ago 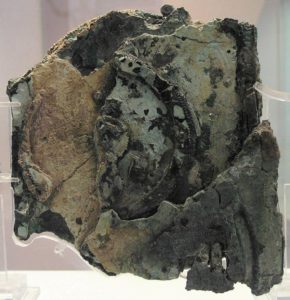 In 1900, a group of sponge divers found the Antikythera wreck off Point Glyphadia on the Greek island of Antikythera. Among the wreckage was the oldest example of an analogue computer – a hand-powered orrery, or mechanical model of our solar system that predicts the positions and motions of the planets and moon, including eclipses.

It took 50 years, however, to reach this conclusion. In 1902, archaeologist Valerios Stais first determined that the corroded bronze and wood box found among other artifacts in the wreckage contained a gear. Unfortunately, saltwater, sediment and time wreaked havoc on the pieces found and further investigations led nowhere. Researchers didn’t look at the piece again until 1951.

Dubbed the Antikythera Mechanism because of where it was found, its origins are unclear. Believed to have been constructed by Greek scientists – the calendar includes month names used in Corinth and its colonies in northwest Greece – it has been dated to somewhere between 205 and 87 BC. The wreck itself occurred around 70-60 BC.

By creating models based on the three main parts found that have been divided into 82 separate fragments after conservation efforts, researchers have been trying to figure out when it was first calibrated and exactly how it worked. In 2022, researchers proposed that the machine’s initial calibration date might have been 23 December 178 BC. Other experts disagree, proposing a date in the summer of 204 BC as a more likely calibration date.

An article in Smithsonian Magazine reports that, “The tradition of making such mechanisms could be much older. Cicero wrote of a bronze device made by Archimedes in the third century B.C. And James Evans, a historian of astronomy at the University of Puget Sound in Tacoma, Washington, thinks that the eclipse cycle represented is Babylonian in origin and begins in 205 B.C. Maybe it was Hipparchus, an astronomer in Rhodes around that time, who worked out the math behind the device. He is known for having blended the arithmetic-based predictions of Babylonians with geometric theories favored by the Greeks.”

One thing, however, is sure: the machine is very complex. Astronomical clocks with similar complexity did not appear again until more than 1,000 years later.

In 2005, researchers undertook x-ray tomography (cross-sectional imaging) and high-resolution surface scanning to look inside fragments of the mechanism and read the inscriptions on the outer casing. This led to the solution to the back of the machine with the discovery of eclipse prediction and the mechanization of the lunar anomaly. Unfortunately, too much of it has been lost for researchers to be able to reconstruct it exactly as it was first made and to truly understand how it worked.

“Because of the loss of evidence, we cannot claim that our model is a replica of the original, but our solution to this convoluted 3D puzzle draws powerful support from the logic of our model and its exact match to the surviving evidence. The Antikythera Mechanism was a computational instrument for mathematical astronomy, incorporating cycles from Babylonian astronomy and the Greek flair for geometry. It calculated the ecliptic longitudes of the Moon, Sun and planets; the phase of the Moon; the Age of the Moon; the synodic phases of the planets; the excluded days of the Metonic Calendar; eclipses—possibilities, times, characteristics, years and seasons; the heliacal risings and settings of prominent stars and constellations; and the Olympiad cycle—an ancient Greek astronomical compendium of staggering ambition.”

They point out that the mechanism “is the first known device that mechanized the predictions of scientific theories and it could have automated many of the calculations needed for its own design—the first steps to the mechanization of mathematics and science. Our work reveals the Antikythera Mechanism as a beautiful conception, translated by superb engineering into a device of genius. It challenges all preconceptions about the technological capabilities of the ancient Greeks.”

All known fragments of the Antikythera Mechanism are now kept at the National Archaeological Museum in Athens, along with a number of artistic reconstructions and replicas to demonstrate how it may have looked and worked.