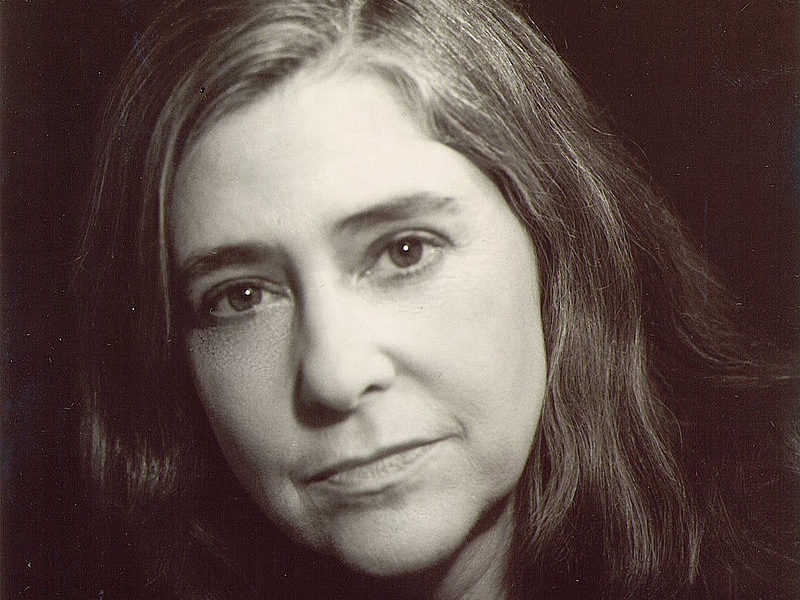 Six decades ago, US President John F. Kennedy announced that the United States would put human beings on the Moon by the end of the decade. But it wasn’t until 2016 that Margaret H. Hamilton (b. 1936), a computer scientist and software innovator, was honored with the Presidential Medal of Freedom for her work on NASA’s successful Moon landings in the 1960s and 1970s. 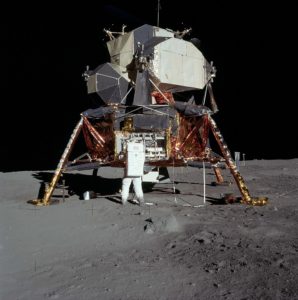 According to Maia Weinstock in an article for MIT News, in 1961, Massachusetts Institute of Technology (MIT) was challenged with a critical mission to develop the flight software for NASA’s Apollo space program. Margaret Hamilton was leading MIT Instrumentation Laboratory’s Software Engineering Division in 1965 when NASA needed the Apollo guidance and control systems to be developed. As a result of her work on this program, Hamilton has been credited with uniquely advancing software engineering. She also coined the term “software engineer”.

When MIT’s lab received the contract for the Apollo systems in 1961, the US had accomplished only two space flights, each carrying just one crewmember in suborbital flights. The systems Hamilton’s team would need to design for the Apollo mission Moon landings were different. To accomplish this, Hamilton’s software would have to address countless issues flawlessly.

The systems had to guarantee the flights of the lunar module Eagle (the Moon lander) and the command module Columbia (the Moon orbiter), as well as carry the astronauts on their journey back and guide the spacecraft during Earth orbit.

“Because software was a mystery, a black box, upper management gave us total freedom and trust. We had to find a way and we did. Looking back, we were the luckiest people in the world; there was no choice but to be pioneers.”
– Margaret Hamilton, Interview for MIT News, 2009

Hamilton’s advances in software development and the computer code she helped to write culminated in July 1969 in the successful landing of Apollo 11, the first manned mission on the Moon.

Critically, her code was able to fix a last-minute malfunction that almost aborted the famous landing. As Hamilton later recalled: “Everything was going according to plan until something totally unexpected happened, just as the astronauts were in the process of landing on the moon.” Alarms went off, requiring the astronauts to make a critical “go/no-go” decision. The alarms were traced to a radar hardware switch being set in the wrong position, but the Hamilton team’s software detection and compensation mechanisms worked, saving the landing and allowing Apollo 11 to successfully touch down. 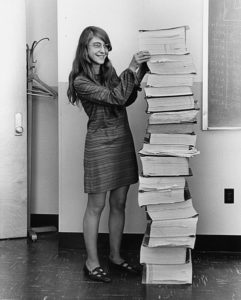 Margaret Hamilton standing next to the navigation software that she and her MIT team produced for the Apollo Project, 1969 (Draper Laboratory; restored by Adam Cuerden, Wikimedia Commons)

Recognition for her groundbreaking work came late. But in 2003, Hamilton received NASA’s Exceptional Space Act Award for her scientific and technical contributions. And in the 2016 Presidential Medal of Freedom citation, she was honored for contributing “to concepts of asynchronous software, priority scheduling and priority displays, and human-in-the-loop decision capability, which set the foundation for modern, ultra-reliable software design and engineering”.

Hamilton’s legacy speaks volumes, both then and now. NASA adapted the Apollo missions’ software as the basis for Skylab, the first US space station. It also served as the foundation for over 100 space shuttle missions and the first digital fly-by-wire systems introduced into future aircraft design. Fly-by-wire systems are aircraft flight control systems that are run by electrical impulses such as from a computer. An example is a computer system that controls the landing of a plane.

After her work at MIT on the Apollo missions, Hamilton moved to the private sector, founding software companies Higher Order Software in 1976 and Hamilton Technologies in 1986.