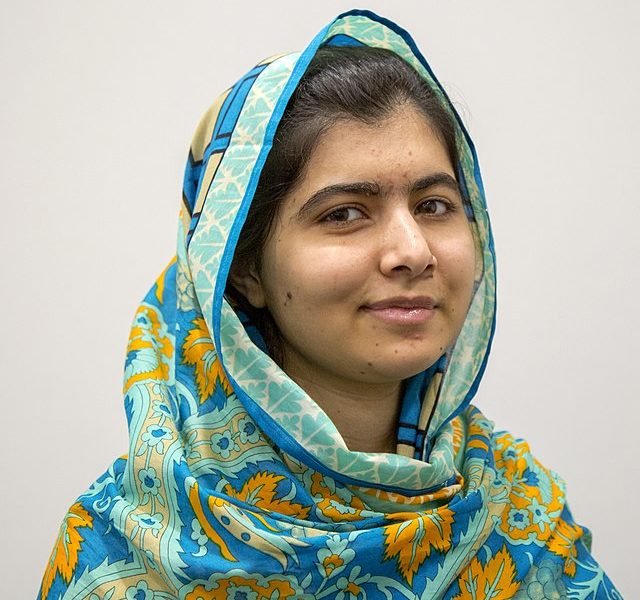 Malala Yousafzai is a Pakistani human rights activist, especially for women’s and girls’ education, and the world’s youngest Nobel Peace Prize laureate (the second Pakistani to receive the prize). Born in the Swat Valley in northwest Pakistan in 1997, she started writing a blog under a pseudonym for the BBC Urdu, detailing her life during the Taliban’s occupation of Swat. She was the subject of a 2009 New York Times documentary about her life as the Pakistani military intervened in the region. She rose in prominence, giving interviews in print and on television, and she was nominated for the International Children’s Peace Prize in 2011, in recognition of her bravery in speaking out for every girl’s right to an education.

On October 9, 2012, while on a bus after taking an exam, Yousafzai was shot by a Taliban gunman in an assassination attempt in retaliation for her activism; the gunman fled the scene. The bullet hit the left side of her head near her eye, cutting into her facial nerve, shattering her eardrum and breaking her jaw joints. Unconscious and in a critical state after surgery in Peshawar and further medical care in Islamabad, her condition improved enough for her to be transferred to the United Kingdom for treatment. Two other girls were also shot on the bus. One of them, Shazia Ramzan, suffered wounds near her collarbone and in her left hand while, the other, Kainat Riaz, was shot in the shoulder. Both returned to the Kushal School and College for girls after regaining their health.

Following her recovery, Yousafzai became a prominent education activist and co-founded the Malala Fund, which advocates for quality education for all girls. It supports education projects internationally, partnering with global leaders and local advocates, and pioneers innovative strategies to empower young women. It is funded by foundations, corporations and individuals.

I Am Malala book cover

In 2013, Yousafzai co-authored I am Malala. She has been awarded numerous prizes, and is a co-recipient of the 2014 Nobel Peace Prize, with Kailash Satyarthi of India. They were recognized “for their struggle against the suppression of children and young people and for the right of all children to education”. Aged 17 at the time, she was the youngest-ever Nobel Prize winner.

In 2020, she graduated from Oxford University with a degree in Philosophy, Politics and Economics. She married Asser Malik, a general manager at the Pakistan Cricket Board, in 2021.