A leading foreign policy voice in the United States, Czech-born Madeleine Albright (1937-2022) was the first woman to serve as US secretary of state, remaining in that position from 1997 to 2001. Secretary of state is the most senior position in the American president’s cabinet and is fourth in the presidential line of succession, after the Vice-President, the Speaker of the House, and the President pro tempore of the Senate.

Some have called Madeleine Albright the first “most powerful woman” in US history and have recognized her as a “brilliant analyst of world affairs”. She had a long career in foreign policy, working first for Zbigniew Brzezinski, President Jimmy Carter’s national security adviser in 1976, and serving as US ambassador to the United Nations from 1993 to 1997. 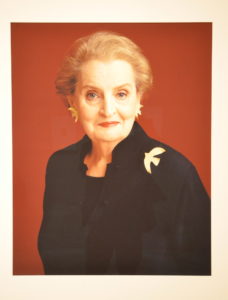 Much can be said about Albright’s life and accomplishments. But one tidbit of information helps to define the kind of person she was. She used all the tools at her disposal to achieve her aims, including the jewelry she wore. It’s rare to see a photo of Albright without a brooch pinned prominently on the left side of her jacket or coat. It was often meant to send a message.

According to Albright in an interview with NPR in 2009, it “all started when I was ambassador at the UN and Saddam Hussein called me a serpent. I had this wonderful antique snake pin. So when we were dealing with Iraq, I wore the snake pin.” She stated that, “On good days, I wore flowers and butterflies and balloons, and on bad days, all kinds of bugs and carnivorous animals. I saw it as an additional way of expressing what I was saying, a visual way to deliver a message.” She wore a spider pin if she wanted her counterpart “to watch out.”

Madeleine Albright will remain an inspiration to women everywhere for being a bold trailblazer who reached the highest echelons of American government, and a champion for diplomacy.

“She gave us hope when we didn’t have it. She became our voice and our arm when we had neither voice nor an arm ourselves. She felt our people’s pain because she had experienced herself persecution in childhood. That’s why she was set against Milosevic up to stopping his genocide in Kosovo.”                           – President Vjosa Osmani of Kosovo

Featured image: Madeleine Albright on stage on January 30, 2016 at a public forum organized by the Madeleine Korbel Albright Institute for Global Affairs, which Albright founded at Wellesley College. She wears a pin in the shape of the Wellesley College “W” logo (photo by Brinacor, Creative Commons Attribution-Share Alike 4.0 international license)