Echinacea: A Gift of Nature (to Fight Coronaviruses?)

A flowering plant in the daisy family, Echinacea has been shown to improve immunity, anxiety, inflammation and skin health and to lower blood sugar levels. It may even have anti-cancer properties. Although human-based research is limited, it is considered safe and well tolerated for short-term use.

Why is this plant important? It’s a good reminder of nature’s gifts and power — especially welcome currently, during the ongoing coronavirus pandemic. A study published in the September 9, 2020 edition of Virology Journal  indicates that a herbal extract of Echinacea purpurea, among other substances, is also capable of killing coronaviruses.

To be sure, the study was conducted with cell cultures (in vitro), and no research on this plant to date has shown any effect against the new coronavirus in humans (i.e. in vivo). And it must be recalled that the data from an in vitro study does not provide proof that the active substance works in humans. Many substances that show an effect in cell cultures frequently prove to be ineffective in human trials.

Nevertheless, the news is uplifting. The study authors put forward the hypothesis that: “Echinacea purpurea preparations, such as Echinaforce®, could be effective as prophylactic treatment for all CoVs [coronaviruses] due to their structural similarities.” That means that the preparations could be used to prevent all the coronaviruses, i.e. the human coronavirus (HCoV) 229E, MERS- and SARS-CoVs, as well as the newly identified SARS-CoV-2. 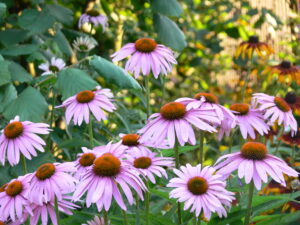 More research is clearly needed. Yet the Echinacea group of plants, which comprises 10 species commonly called “coneflowers”, has been known for its medicinal properties for over a century. American Indian tribes used Echinacea angustifolia, the narrow-leaved purple coneflower,  to relieve a number of aches and pains, including to treat colds, sore throats, headaches and toothaches. The recently published study states that “Echinacea plants have traditionally been used in North America for the prevention and treatment of cold and flu symptoms and are now one of the most widely used medical plants in both North America and Europe.” The leaves, flowers and roots are used to make capsules/supplements, liquid extracts and teas.

That said, the plant is powerful and can cause side effects, such as nausea, abdominal pain, diarrhea and allergic reactions. It also may have undesirable reactions when taken with drugs prescribed for heart disease and other ailments. Thus, it should be used with caution and on the advice of a doctor. It may be natural, but that does not mean it’s not harmful under certain circumstances.

People typically take Echinacea to give the immune system an extra boost. According to one source, “Echinacea is one of the top-selling herbal remedies throughout the world. … there is some evidence that it stimulates the body to produce more infection-fighting white blood cells, such as T-lymphocytes and killer white blood cells. It may also stimulate the release of interferons, one of the body’s most potent infection-fighting weapons.”

So let’s hope that in vivo research that examines the actual effects of the plant on an organism (a laboratory animal or a human) will soon take place. Animal studies and clinical trials might confirm Echinacea purpurea‘s tendency to destroy or inactivate viruses and its antiviral potential against human coronavirus.