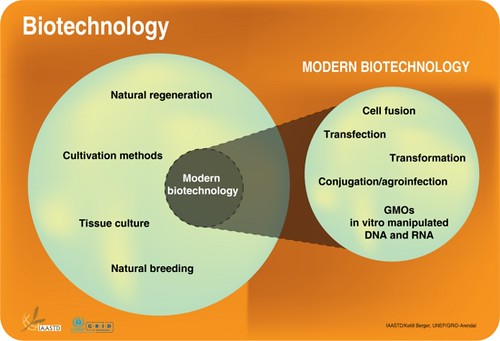 Biotechnology Can Be the Solution

Biotechnology or biotech is not just the weird stuff that goes on in Michael Crichton novels (for example Jurassic Park, Next, Prey or The Andromeda Strain). According to the United Nations Convention on Biological Diversity, it is “any technological application that uses biological systems, living organisms or derivatives thereof, to make or modify products or processes for specific use”.

And while this may seem to be a new concept, humans have actually been using biotechnology for thousands of years, in things like agriculture, producing food, and creating medicines. Take, for example, man’s best friend. Dogs evolved from the domestication of the grey wolf. Or how about those beloved Bing cherries, granny smith apples or a green or red Anjou pear? They are the result of a wild fruit tree being grafted with the desired variety to obtain a certain quality of fruit. The same is true for all of the varieties of roses found in public parks, and thousands of other plants.

But the concept has evolved with the times to include a multitude of other domains where advancing science is making it possible to engineer other processes. For example, the World Economic Forum’s Global Agenda Council on Biotechnology has just published a list of “10 developments that they believe could help not only meet the rapidly growing demand for energy, food and healthcare, but also increase productivity and create new jobs, should issues such as regulatory certainty, public perception and investment be tackled successfully.” Essentially, it is a non-exhaustive list of how biotechnology could improve your life.

Most of the ideas on the list are constantly in the news, such as genetically modified organisms (GMOs) as a means to increase sustainable food production, advanced healthcare through genome sequencing, and bioproduction of sustainable chemicals, energy and other materials, some of which is already going to scale. But two of the more interesting ideas get very little publicity: carbon dioxide as a raw material and biotech improvements to soil and water.

On the carbon dioxide front, the blog post says “Recent advances are rapidly increasing our understanding of how living organisms consume and use carbon dioxide. By harnessing the power of these natural biological systems, scientists are engineering a new wave of approaches to convert waste carbon dioxide and other molecules into energy, fuel, chemicals, and materials that may help the world meet its needs.” For example, Bayer is looking into using CO2 as an ingredient in plastics. AkzoNobel is using CO2 as a raw material for green chemistry. And greenhouses in the Netherlands uses CO2 for plant growth and production.

As for biotech improvements to soil and water, the blog post says “A new generation of developing technologies, such as bioremediation to use microbial metabolism to remove pollutants, bioregeneration to renew or restore life-supporting resources using biological processes, and bioaugmentation to introduce a group of natural microbial strains or a genetically engineered variant to treat contaminated soil or water, offers great promise to not only further restore these resources but also to augment their potential.” For example, some companies are using microorganisms (bacteria) to reduce sulphur gas emissions. The US Environmental Protection Agency applied fertilizer to the Alaska coast after the Exxon Valdez oil spill, finding that it boosted the capacity of oil-degrading bacteria, causing it to degrade twice as fast.

The biotechnological solutions to improve lives and make the world a better, healthier place for everyone and everything living on it are out there, just waiting to be found, tested and tried. While Michael Crichton and others may try to terrify us into believing that science is not the solution, it clearly is and always has been.