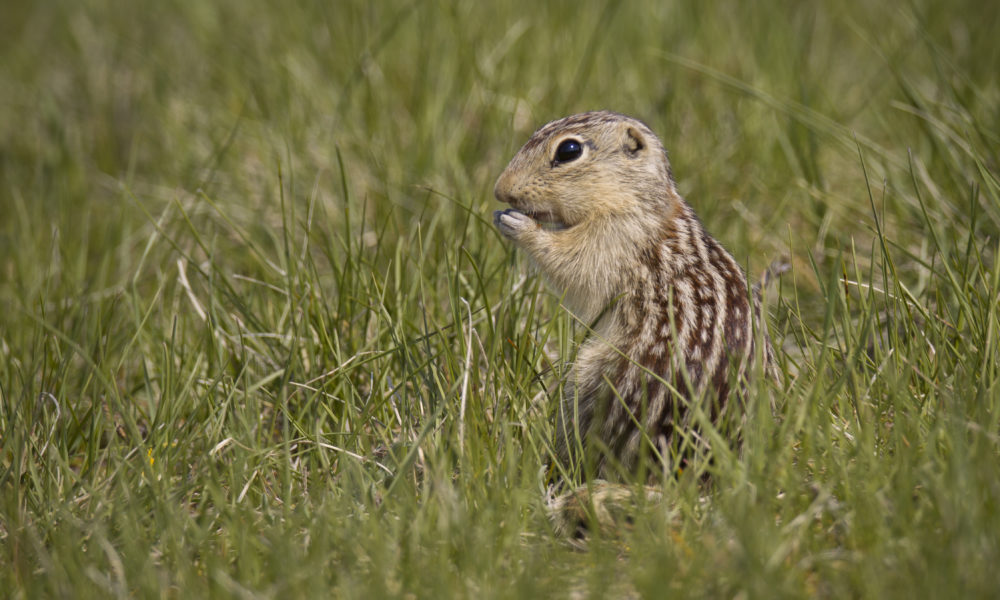 Squirrel Hibernation without Muscle Loss: The Promising Implications for Humans

The fact that ground squirrels burn almost no energy when they hibernate – with no loss of muscle mass – has implications for the many millions of people globally who experience muscle wasting as a consequence of various conditions. A decrease in muscle mass can be caused by undernourishment, for instance, which affects almost 830 million people worldwide. Another cause is sarcopenia, an age-related, involuntary loss of skeletal muscle mass and strength that affects all humans, leading to a 50% decline in mass by the age of 80. In addition, people also suffer from muscle loss during prolonged periods of inactivity after an injury or illness.

Bears, though, lose far less muscle mass and strength than humans and mice when they are inactive, even though these large mammals remain immobile for 5 to 7 months and generally do not eat, drink, defecate, or urinate during hibernation. In that amount of time, a bed-ridden or malnourished person would experience almost twice as much muscle loss. When bears and ground squirrels hibernate in winter, they stop eating and last until spring using up the fat reserves they’ve stored in their bodies.

Such long fasting and inactivity would normally significantly reduce muscle function and mass, and yet hibernators are able to resist muscle atrophy. The reason they can do this has come to light in recent research that proves a theory put forward in the 1980s called “urea nitrogen salvage.” This process means that these animals manage to build muscle during their winter sleep, even with no fuel from food. This development could be very good news for the undernourished masses, for the elderly and for people subjected to long periods of physical inactivity. As explained in a 2022 ScienceDaily article, “The theory posits that hibernators harness a metabolic trick of their gut microbes to recycle the nitrogen present in urea, a waste compound that is usually excreted as urine, and use it to build new tissue proteins.” Dietary nitrogen, which is needed to build muscles, usually comes from food and protein in particular, an essential nutrient that helps to repair and build muscle tissues.

The newly published research conducted at the University of Wisconsin-Madison by biologist Matthew Regan and his team, who studied the thirteen-lined ground squirrel, confirms that this small rodent gets its nitrogen during its deep hibernation from urea-recycling gut microbes. As described in a Science article, “the team injected ground squirrels with urea containing a form of nitrogen that could be tracked throughout the body. Some of the labeled nitrogen made its way into the squirrels’ livers, intestines, and muscles.” This discovery shows “the importance of the gut microbiome to hibernation and suggest[s] that gut microbes could play such a role in other species.”

In humans, the results of this study could mean that the possibility of harnessing the microbiome to treat the loss of muscle mass in people appears to be within reach. During space travel, muscle proteins are suppressed so, according to Regan, it might be possible to help astronauts “minimize their own muscle-loss problems caused by microgravity-induced suppression of protein synthesis.”

In other areas, this discovery could impact people who suffer from nutrient deficiency in their diet, as well as the elderly during age-related muscle loss, and patients who must remain inactive for an extended period during an illness or after an accident, helping them build muscular strength. Although Regan confirms that these applications “are a long way from delivery, and a lot of additional work is needed to translate this naturally evolved mechanism safely and effectively to humans,” he adds that, “a study from the early 1990s provided some evidence that humans are capable of recycling small amounts of urea nitrogen via this same process. This suggests that the necessary machinery is in place. It just needs to be optimized.”

One possibility could be to create a pill containing prebiotics or probiotics (food components that help promote beneficial bacteria) that in people would stimulate a gut microbiome like the one these squirrels and other hibernators have.