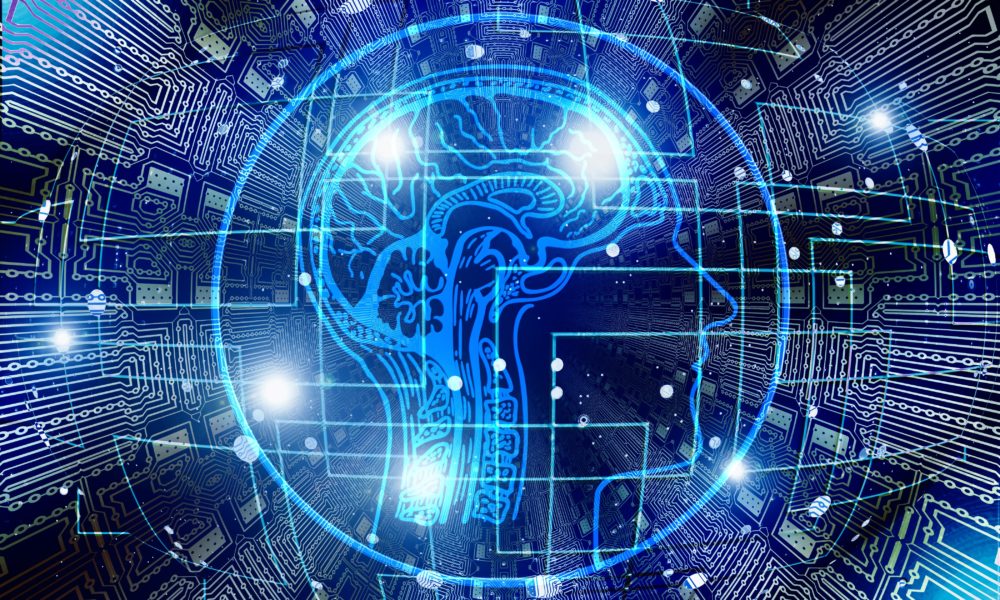 Mysterious and complex, fascinating and disturbing, artificial intelligence (AI) is the subject of much debate. Beyond the controversies, this technology, envisioned in the 1950s by British mathematician Alan Turing (1912-1954), is rich in practical applications in the domains of health, the environment, and industry, among others.

So what is AI? AI brings together technical systems, combining a collection of data and algorithms, capable of doing certain cognitive tasks usually performed by the human brain. To a certain extent, it reproduces human intelligence with the help of algorithms. AI is rooted in reality, offering concrete solutions that can be used to improve people’s lives.

But to step back a bit, what is an algorithm? One easy-to-understand definition is provided by Jory Denny, an assistant professor of computer science at the University of Richmond, Virginia, in an article in The Conversation: “An algorithm is a series of instructions telling a computer how to transform a set of facts about the world into useful information. The facts are data, and the useful information is knowledge for people, instructions for machines or input for yet another algorithm. There are many common examples of algorithms, from sorting sets of numbers to finding routes through maps to displaying information on a screen.” 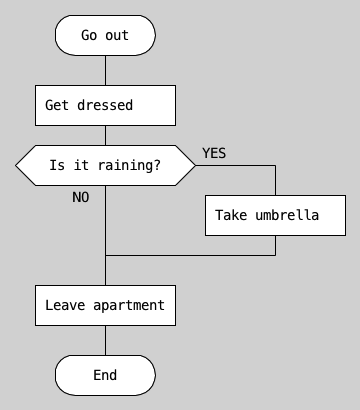 The DRAKON chart for the algorithm of going out (image by Stepan Mitkin, CC Attribution-Share Alike 3.0 Unported license)

Denny continues, “To get a feel for the concept of algorithms, think about getting dressed in the morning. Few people give it a second thought. But how would you write down your process or tell a 5-year-old your approach? Answering these questions in a detailed way yields an algorithm.”

So AI in machines (a computer or a robot controlled by a computer) reproduces human intelligence with the help of instructions and information (data, facts, knowledge). The definition of AI proposed by the World Economic Forum is “systems that act by sensing, interpreting data, learning, reasoning and deciding the best course of action.” The Organisation for Economic Co-operation and Development (OECD) defines it as a “machine-based system that can, for a given set of human-defined objectives, make predictions, recommendations, or decisions influencing real or virtual environments. AI systems are designed to operate with varying levels of autonomy.”

So, what concretely can AI do to improve people’s lives, for instance in the fields of medicine, the environment, or industry? 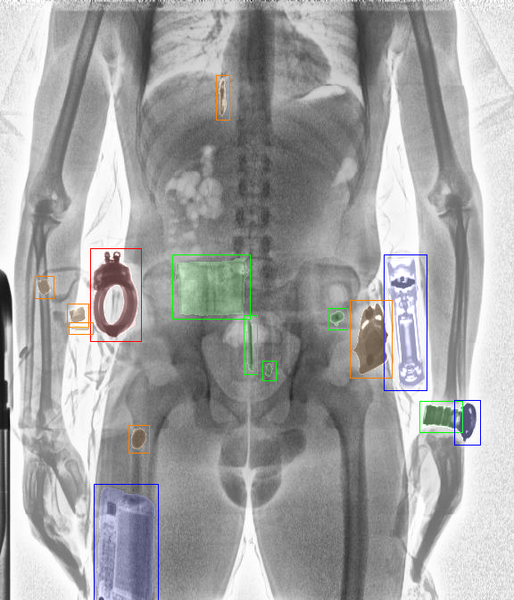 In medicine, AI is a remarkable tool in medical imaging: it can help clinicians better detect fractures, tumors, infections, and other irregularities on X-rays. The technology does not replace doctors; it helps them to better diagnose diseases and to do so more quickly and accurately. In addition, it is very effective in cancer analysis, and can also be used to discover drugs and speed their development. AI reinforces preventive medicine, even in such branches as cancerology and cardiology, by predicting patients’ future conditions and recommending more personalized treatments.

A practical example: The Swiss start-up Ava Women markets a fertility bracelet that when worn at night monitors the menstrual cycle by recording certain physiological parameters, such as temperature, respiratory rate, and heart rate. By analyzing this data, the AI algorithm is able to detect in real time the five most fertile days in a woman’s cycle.

In the area of the environment and fighting pollution, AI can contribute to decarbonizing the economy through algorithms measuring the CO2 impact of human activities, in industrial production, for example. It can evaluate and predict environmental risks by identifying air and water pollution – information that can then be used to warn populations of the risks. 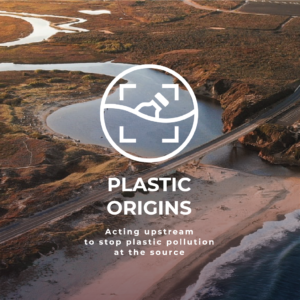 A practical example: Developed by Surfrider Foundation Europe, a non-profit organization devoted to protecting lakes, rivers, the oceans, and coastlines, the Plastic Origins project was set up to map plastic pollution in European waterways. The project uses an AI algorithm to detect and count waste on the banks of rivers and coasts. Anyone can film the riverbanks using the Plastic Origins app, and the algorithm then analyzes the videos, detects the litter, counts it, geolocates it and classifies it according to its type (bottle, fragment, etc.). The program “invites volunteers on a river quest to monitor inland plastic pollution and build local solutions to prevent it from reaching the Ocean.” Check out the Plastic Origins website. 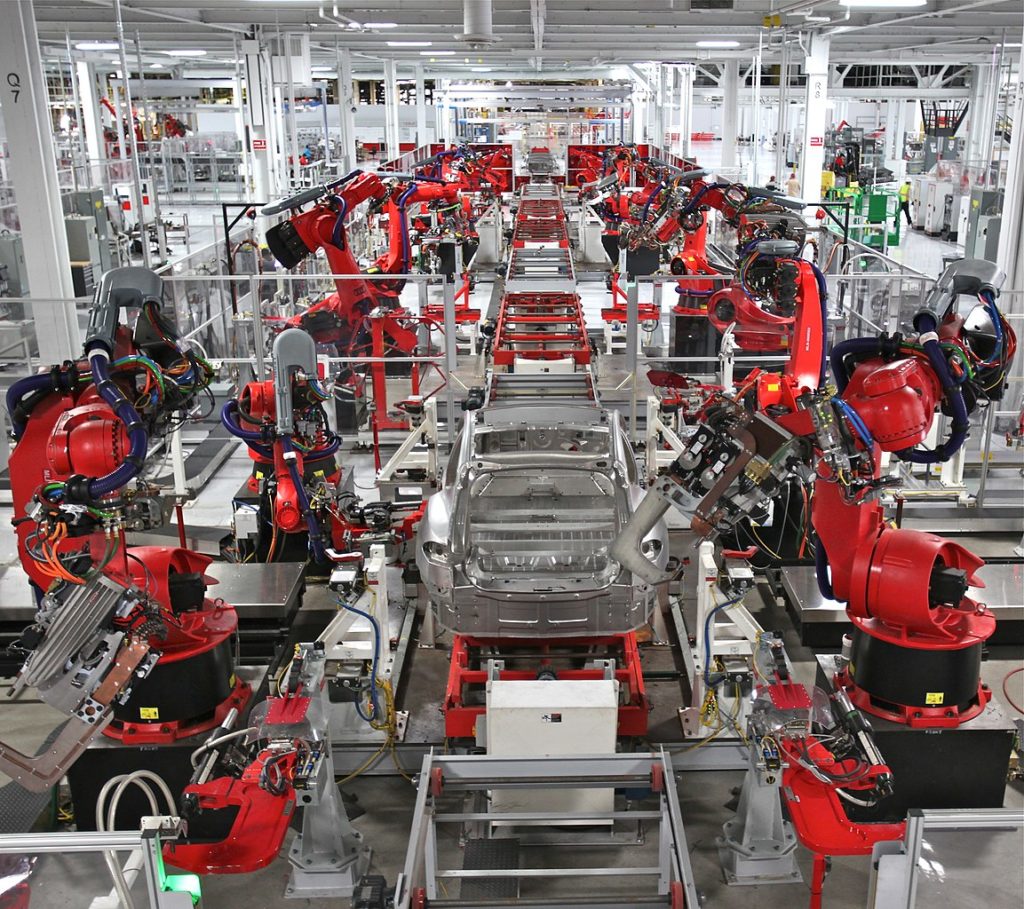 In yet another area, industry, AI-driven robotics play a central role in warehouses as well as on production lines. AI can help to ensure quality control through learning algorithms, which are programs that adjust themselves and “learn” to perform better as they are exposed to more data. AI use in the automotive and aeronautical industries, for example, has helped to improve quality, efficiency, and security controls, plus cut costs.

A practical example: The aircraft manufacturer Airbus used AI to design a cabin partition for its A320s. Using AI, thousands of configurations were tested, a process that would have taken a great deal more time had it been done manually. The result was a partition that was just as strong as the previous model but 45% lighter. This means these aircraft use less fuel, which translates into fewer emissions.

Like any other technology, AI must be made to serve people and contribute to their well-being. For that, it must be designed with the express intention of benefiting humankind, it must be applied ethically and without bias, and it must be monitored and regulated.

“If we do it right, we might be able to evolve a form of work that taps into our uniquely human capabilities and restores our humanity. The ultimate paradox is that this technology may become a powerful catalyst that we need to reclaim our humanity.” – John Hagel, Founder, Beyond Our Edge