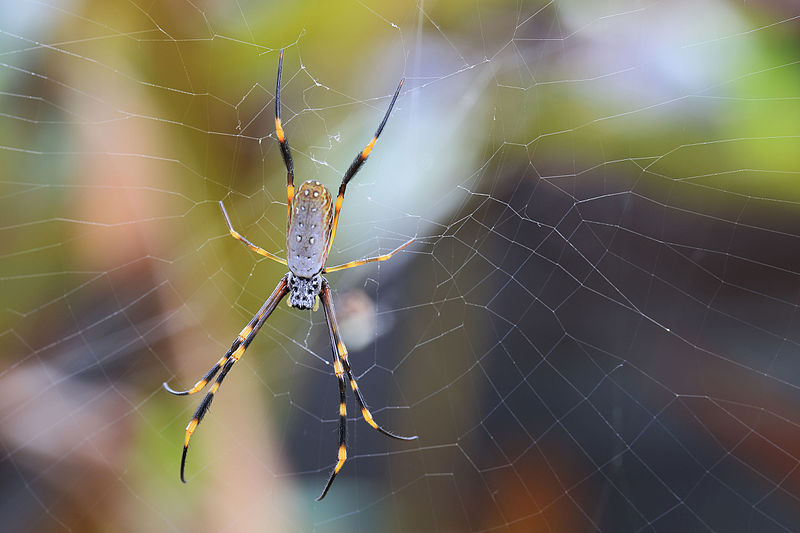 Over the last 300 years, only a handful of people have tried making spider silk into a cloth. Yet natural spider silk is soft, light and incredibly strong. Its strength, resilience and flexibility are as yet unmatched (scientists are still trying to produce synthetic spider silk that replicates the properties of the natural protein fiber). In fact, spider silk is “finer than the human hair (most threads are a few microns in diameter) … incredibly tough and is stronger by weight than steel,” according to Tanveer Malik and Shyam Barhanpurkar, professors of textile engineering and chemistry, in a 2018 article entitled “Spider Silk – Properties and Uses”. 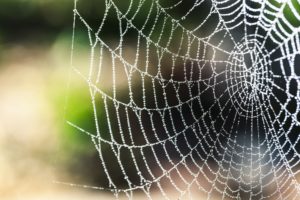 Image by Benjamin Balazs from Pixabay

All spiders produce silk, which they use to climb, float through the air, spin webs, build egg sacs and wrap prey, for instance. The silk is made of many thin threads stuck together. When the spider releases the silk produced from glands that manufacture a protein-rich liquid in its abdomen, the solution hits the air and becomes hard.

Golden Orb-Weaver spiders (Nephila) naturally produce golden thread. These spiders can be reddish to greenish yellow in color, with characteristic whiteness on the fused head-thorax area. Many have striped legs. The females measure 4.8–5.1 cm (1.8–2 in.), not including the leg span. With legs extended, it can be as large as a human hand. These spiders are common in warm regions, such as in Australia, Asia, Africa and the Americas.

Simon Peers, a textile designer, and Nicholas Godley, an entrepreneur, worked 8 years, from 2004 to 2012, to produce two items with the silk: a shawl and a cape. The cape took 3 years to make from the thread of 1.2 million Golden Orb-Weaver spiders. The spiders were individually collected in the wild in Madagascar, kept alive, harnessed and “milked” to extract 30-50 meters of thread, a procedure that takes around 25 minutes. The spiders were then released back into nature.

Around 60 to 80 people collected the spiders daily. Once the silk was obtained, handlers put it in weaving cones. It was then transformed into thread and used to weave and embroider the cape. (View the Victoria and Albert Museum video below on how the cape was made.)

No other garments made from spider silk remain. Bed hangings were displayed during the 1900 Exposition Universelle in Paris but they have since been lost. The Frenchman and naturalist François-Xavier Bon de Saint Hilaire was the first to demonstrate in 1709 that fabric could be made from spider silk. He made gloves and stockings from old spider cocoons that he boiled, washed, dried and threaded.

Because spider silk is incredibly strong, resilient and elastic, it holds great potential for commercial and consumer applications. In the Solomon Islands today, people still use the silk as fishing lures to catch needlefish. Possible uses for the silk, according to Malik and Barhanpurkar, include to make artificial tendons and ligaments, bandages and surgical threads, rip-proof and lightweight clothing, biodegradable bottles, ropes, seat belts and parachutes.