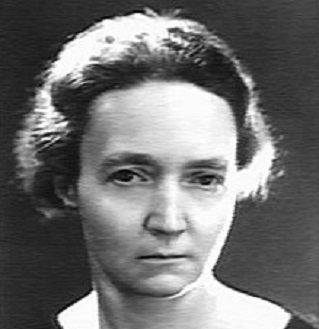 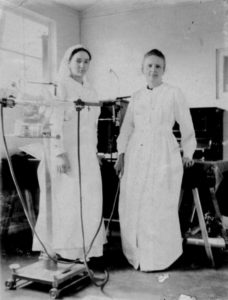 Irène Joliot-Curie was a radiologist, activist and politician as well as the daughter of two of the world’s most famous scientists: Marie and Pierre Curie. Along with her husband, Frédéric, she discovered the first-ever artificially created radioactive atoms, paving the way for innumerable medical advances, especially in the fight against cancer.

“Without the love of research, mere knowledge and intelligence cannot make a scientist.” – Irène Joliot-Curie

Born in Paris in 1897, according to the Nobel Prize website, her education was “sometimes unusual. When she was a young teenager, Irène Curie attended a cooperative ‘school’ organized by her mother, in which six professors taught each other’s children in their subjects of expertise, from physics and mathematics to German and art.”

During World War I, Joliot-Curie learned from personal experience that science could save the lives of wounded soldiers. She assisted her mother, who had developed mobile radiology units used at the front, examining patients, both soldiers and civilians, in hospitals. The three mobile X-ray cars they used were called the “petites Curies” or Little Curies. The X-rays helped doctors locate broken bones and see bullets and shrapnel in the wounded to remove them.

After the war, while working toward her doctorate, Joliot-Curie became her mother’s assistant at the Radium Institute, where Marie Curie asked her to train fellow researcher, Frédéric Joliot, whom she married in 1926.

In 1934, the couple made a discovery that would alter the course of radiation research. They bombarded aluminum foil with alpha-particles (helium nuclei) and discovered that the aluminum continued to emit positrons even after the bombardment stopped. They deduced that alpha-particle bombardment had converted stable aluminum atoms into radioactive atoms. In other words, they had manufactured radioactive atoms. The ability to artificially create radioactive atoms changed the course of modern physics because the only way to do this previously was to extract them from their natural ores, which was a difficult and costly process.

Radioisotopes quickly became – and remain – invaluable tools in biomedical research and in cancer treatment. For discovering that radioactive atoms could be created artificially, the Joliot-Curies received the Nobel Prize in Chemistry in 1935.

After receiving the Nobel Prize, Joliot-Curie also turned her attention to politics. Years before women could vote in France, in 1936 she became the Undersecretary of State for Scientific Research, advocating for state funding for research. A member of the Comité National de l’Union des Femmes Françaises (National Committee of the Union of French Women) and of the World Peace Council, she spoke against fascism and Nazism and in favor of women’s education. In 1939, fearful of how the military might use her research in nuclear fission, she and her husband locked their documentation in a vault.

Irène Joliot-Curie was a member of numerous foreign academies and scientific societies, and held honorary doctor’s degrees from several universities. In 1939, she was named Officer of the Legion of Honor, the highest French order of merit. She died in Paris in 1956, and continues to be remembered as a woman who changed science.