Those of you who know a bit about sailing will appreciate how difficult the Vendée Globe yacht race is. It’s a non-stop race around the world, sailed solo, without assistance, and it takes place every four years. This year’s race began on Sunday 6 November. Over the years, 138 sailors have taken part in the seven versions that have taken place since the first edition in 1989, but only 71 crossed the finish line. The fastest time so far is 78 days. 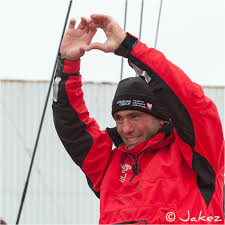 Tanguy de Lamotte is a young Frenchman taking part. His objective in doing so is to help children with heart disease who can’t afford an operation in their own country. His sail is covered in hearts with the name of the project he supports: Initiatives Cœur (Heart Project).

Initiatives Cœur is a charity that brings young children from around the world to hospitals in France so they can undergo cardiac surgery. For every click its website receives, the association that runs the program, Mécénat Chirurgie Cardiaque Enfants du Monde, receives 2 euros from sponsors. According to this association, around 20 kids are operated on in nine French cities every month. Tanguy de Lamotte’s efforts alone have so far saved the lives of 30 of them. Their photos are available here.

The Vendée Globe is a gruelling and dangerous event. According to the race website, the rules of the game are strict. The skippers must navigate without help, must themselves repair any damage they sustain, and must care for their own health in case of injury or illness, although they may seek the advice of the race doctor. They may not go alongside another boat or allow anyone on board to receive technical assistance. The sailors can get information from their technical team on how to repair something but they must fix it themselves.

But the race captures worldwide attention and in this case is being used to highlight a meaningful cause. Simply by taking part in this adventure, the 29 sailors are worthy of attention. Two weeks out, it looks now like Tanguy de Lamotte may not make it around the world this time because of technical problems, but his particular efforts are remarkable.

Just by clicking on and “liking” the Initiatives Cœur Facebook page, you too can help save lives today! 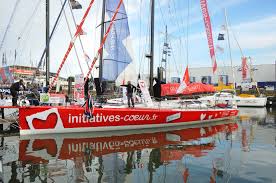