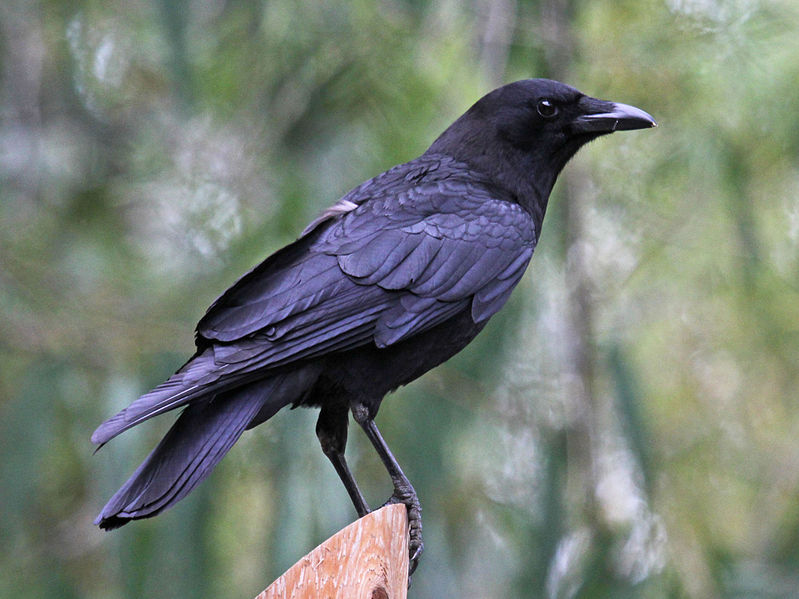 Crows are very intelligent birds, or so most ornithologists tend to believe. They use tools and can solve problems, and some, including the common raven (Corvus corax), can learn to talk better than certain parrots. One small Dutch company, called Crowded Cities, is using crows’ intelligence for the public good.

The company has created an apparatus, the Crowbar, to train the birds to recognize and pick up cigarette butts on the streets. In the Netherlands alone, according to Crowded Cities, over 6 billion cigarette filters are thrown on the ground each year.

It’s a simple idea. A crow picks up a butt, takes it to the Crowbar and drops it into a funnel. A camera verifies the object is a filter and in response releases a peanut to reward the bird.

The magazine Popular Mechanics describes how it works in an article titled, “Could Crows Be the Solution to the Scourge of Cigarette Butt Litter?” It states, “First, the machine presents a piece of food next to a cigarette butt on a small platform, training the crow to expect food from the machine. Second, the machine starts dispensing the food only after the crow arrives at the machine, teaching the crow how the machine operates. Third, the machine presents only the cigarette butt with no food. The crow is confused and starts looking around for the food, and inadvertently knocks the butt into the receptacle, dispensing a food pellet. The final step is to remove the cigarette butt entirely, leaving a few scattered on the ground around the CrowBar. The crow will start collecting butts from the surrounding area and bringing them to the machine, and the training is complete.”

The Crowded Cities website affirms that 4.5 trillion cigarette butts are tossed on the world’s streets every year. That makes them “the most littered item on earth”. Since they are made of plastic fibers, the filters take as long as 12 years to break down in the open.

Crows, too, are omnipresent and global. These black birds of the genus Corvus, along with ravens, rooks, jays, magpies and nutcrackers, form part of the Corvidae family. Ravens in particular are common around the globe. According to Live Science, “They are found in northern Europe, Scandinavia, Iceland and Greenland; throughout Asia, from the Pacific Ocean to the Himalayas to India and Iran; across northwestern Africa and the Canary Islands; and in North and Central America as far south as Nicaragua.”

So because of their prevalence, intelligence and adaptability, crows are perfect to help rid our planet of litter. Could they be taught to pick up other rubbish thrown out into the open?

Encourage Ruben van der Vleuten and Bob Spikman in this clever endeavor to help solve the problem of litter and city pollution.