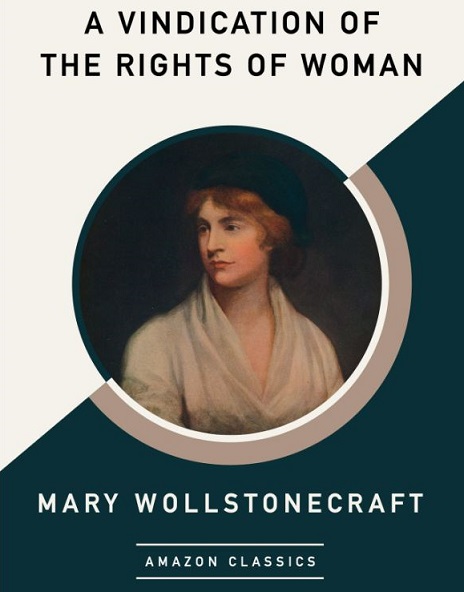 Mary Wollstonecraft: A Women’s Rights Activist Ahead of Her Time

Mary Wollstonecraft (1759-1797) was an early British feminist, writer and controversial thinker who promoted educational and social equality for women. A radical proposition at the time, a main argument she defended in her writings was that girls and boys should be educated together and that women and men should share parental responsibilities. Her life was characterized by the belief that an equitable social order, founded upon women’s education, was truly attainable and would benefit all society. 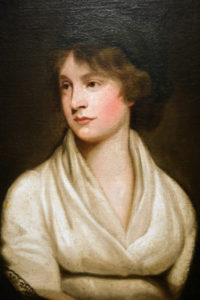 Even though she was raised in a financially unstable and violent home, was denied educational opportunities and was abandoned by the father of her first child, Wollstonecraft’s intellect and love of literature inspired her to become a writer by profession. This unconventional decision and her propensity to write about political and philosophical matters caused her to be considered “unwomanly”. Her belief that both sexes should be educated and held to the same standards of behavior went against the beliefs of the time. In her era in England and indeed in most western countries, women were expected to remain subservient to their fathers and husbands. They could not vote, own land while married or enter many professions. Middle- and upper-class women were expected to stay home to take care of the children and run the household.

Financial and family circumstances as well as her strong personality led Wollstonecraft to leave home when she was 19. She worked as a governess and school teacher. In 1784 she opened a small school for girls in the village of Newington Green, located three miles north of London. Little information about this experience remains, but it inspired her to write Thoughts on the Education of Daughters: With Reflections on Female Conduct, in the More Important Duties of Life (1787).

In 1788, Wollstonecraft worked for the influential London bookseller and publisher, Joseph Johnson. He was known for publishing radical texts and the periodical Analytical Review, to which Wollstonecraft contributed regularly. Through Johnson, she was able to publish several works considered polemic at the time.

Wollstonecraft was known for challenging the accepted view of women as helpless household “adornments.” In her opinion, education was the key to women achieving a sense of self-respect and an enhanced self-image that would enable them to effectively apply their own intellect and abilities.

This belief inspired her most famous book, A Vindication of the Rights of Woman, published in 1792. In it she argued that “women are ‘degraded’ by society through poor education, lack of respect, and limited choices as adults. She objected that English society encourages women to dwell solely on ‘sensation,’ emotion, or sentiment rather than logic and abstract reasoning.” She asserted that the poor educational system offered to girls limited their instruction and purposefully trained them to become frivolous and incapable so they remain in their “place” as housekeepers and mothers. She also mentioned abortion as the consequence of moral double standards and women’s submission to sexual exploitation. 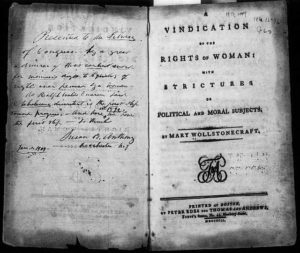 Title page and dedication page of A Vindication of the Rights of Woman by Mary Wollstonecraft, US Library of Congress

According to Biography.com, Wollstonecraft’s ideas and books were “truly revolutionary at the time and caused tremendous controversy.” But she became an inspiration for later generations of feminists, including activist Susan B. Anthony (1820-1906), whose personal copy of the pioneering book resides in the Library of Congress (USA).

Wollstonecraft met her future husband William Godwin at the home of their mutual publisher Joseph Johnson. They married in March 1797, due to her pregnancy. That August she gave birth to a daughter, Mary Wollstonecraft Godwin (who later married the poet Percy Shelley and famously wrote the Gothic novel Frankenstein). However, only 11 days later due to complications of childbirth, Wollstonecraft died.

Mary Wollstonecraft was a woman of strong convictions and a true radical who wanted to bridge the gap between societies’ circumstances and a new age of reason and benevolence. She saw her task as helping women to achieve a better life for themselves, their children, and also their husbands. Her books, life and legacy have been the subject of many biographies, including her husband’s Memoirs of the Author of A Vindication of the Rights of Woman (1798).

Mary Wollstonecraft was without a doubt a founding feminist philosopher. By at least one account, her famous book is “a classic of rationalist feminism that is considered the earliest and most important treatise advocating equality for women.”

Featured image: Cover of A Vindication of the Rights of Woman by Mary Wollstonecraft, 1792 (Amazon Classics Edition, 2018)