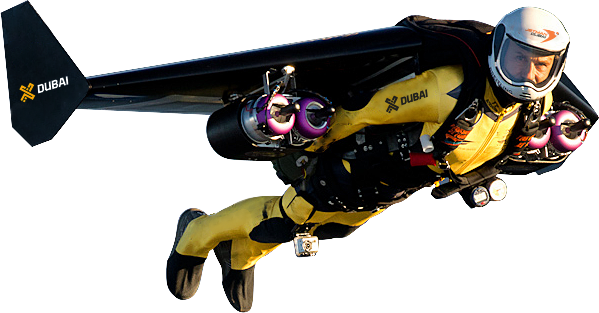 Yves Rossy is Jetman. He’s a Swiss pilot who has wings. To be exact he has carbon-fiber wings. He had developed a flying suit and backpack equipped with semi-rigid wings that span 2.4 metres (7.9 feet). They are powered by four modified jet engines.

Rossy’s career started when he learned how to fly, became a fighter pilot and then a commercial pilot for Swiss International Air Lines. In 2006 he became the first person to fly with a jet-propelled wing.

According to Jetman’s website, Rossy “first came to the world’s attention in May 2008 with his first official flight over the Swiss Alps. An incredulous public sat up and took note. In September 2008, 99 years after the first crossing of the English Channel by air, he followed the path of Louis Blériot, achieving an amazing flight that was broadcast live to 165 countries and widely covered by the media worldwide.”

Using the 55 kg (121 lb) powered wingpack, to steer Rossy moves only his body. He flies at 200 km per hour (124 mph). When he arches his back, he gains altitude and when he pushes his shoulders forward, he goes into a dive.

See Jetman fly and talk about his experience: