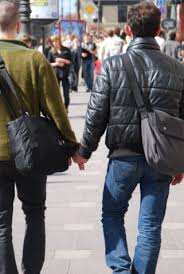 The assault of a married male couple in Arnhem, the Netherlands, as they walked in the street recently holding hands is the bad news. They were allegedly attacked by a group of youths in what has been called a hate crime.

The good news is that, following that incident, men everywhere heeded a journalist’s call on Twitter for men to walk hand in hand to show solidarity for gay rights. According to The New York Times, “Dutch politicians, actors, police officers, soldiers, and athletes took to the streets, holding hands. Hundreds of people marched through the streets of Amsterdam to show their support.” And they posted photos as proof, using the hashtag #allemannenhandinhand (all men holding hands). Others also held hands in public in cities as far away as Havana, London and New York.

Tolerance is key. Still according to to The New York Times article, “Homosexuality was removed from the Dutch criminal code in 1811, and the Netherlands was the first country in the world to legalize gay marriage, with the first ceremonies in 2001.”